There are certain things you would think are common knowledge in our society; reality tv is not real, the Patriots are a bunch of cheaters, and you don’t ever ask a woman if she’s pregnant. Never.

I once ran into an old friend at a bar while celebrating a mutual friends birthday. Looking at her, she was still a petite girl but was rocking a round belly. I ignored that shit. She looked pregnant, but I wasn’t taking the chance that she didn’t just have some insane amount of belly bloat that night. I let her tell me. Sure it was awkward as I danced around the topic in conversation, but it’s way less awkward than asking someone if they’re pregnant when they are not.

Unfortunately, not everyone is as socially savvy as I am,  and I’ve recently been asked twice if I’m pregnant. Once by a good friend and once by a client. I can’t figure which is more insulting, so right now we’ll say they are equally on the shit list I have running in my head.

Back in November I was playing Thanksgiving morning football with a bunch of friends and one of my guys friends walks up to me (while I’m chugging a half time beer) and asks me if I’m pregnant. If you’ve ever been asked this when you are not pregnant you know how caught off guard I was. My first reaction was to point out the beer I was drinking, say “nope” and move on with drinking it. My next reaction was pissed that it meant he doesn’t read my blog. Not 2 weeks earlier did I write my post about the chemical pregnancy I just experienced, but he had no clue. 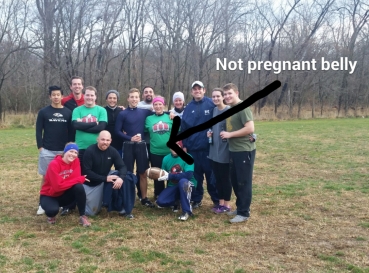 Being that that experience was so fresh on my emotional triggers list I focused on my sadness about that…until the next day when I looked at a picture of everyone together after the game.  I looked pregnant. My stomach was puffing out over my Under Armour and my shirt was tight all the way around my mid-section donut. Jesus, I look pregnant. Sonofabitch.  Now I understood why he asked that… but let’s not mistake it, no matter how pregnant a woman looks- Do Not Ask A Woman If She Is Pregnant.

Scenario #2 happened about 2 weeks ago; I was at a design firm for a presentation and while I was waiting for the designers to arrive I was chatting it up with my contact at the firm.  I just happened to be adjusting the jacket I was wearing (trying to help conceal the fact I’ve gained 5lbs) and she looks at me and drops the bomb “are you expecting”.  Again, when you are a woman that is not pregnant, you are never expecting to be asked this question so are caught entirely off guard. My response? “Nope, just fat”.

It’s important to remember this person is a client and I need to maintain a good working relationship with them. I also knew that I was going to spend the rest of the day crying thanks to her inconsiderate question, and my hatred of my fat. I knew she felt bad (because while dumb is a decent human being), so in order to make myself feel a little bit better I thought I would just give her a little mind fuck to send her home with. I told her about my early miscarriage I had suffered a couple months earlier and that I was eating my way through the pain of that. She of course is mortified and now bending over backwards to get me appointments and talk about upcoming projects they’re working on. A few nice fat orders from this firm and I’ll take her off the shit list (pun intended).

There is even an article on HuffPost today from a woman that is thin and in shape being asked when she’s due. This makes me a feel a little better that it happens to skinny people too. It also really emphasizes my point- Do Not Ask A Woman If She Is Pregnant.

1 thought on “WTF Wednesday: Repeat After Me- Do Not Ask A Woman If She Is Pregnant”