What good is having a blog if you don’t take a moment to collect your thoughts and reflect everything that has happened over the past year?

2015 was interesting and exciting year for our family. In January we were on month #6 of trying to get pregnant, and after a very early miscarriage in November I was convinced something was wrong with me. Luckily, within the first two weeks of the year, I got pregnant (Although I didn’t know it until after a weekend in Vegas- figures huh)!

One thing I never shared was that my husband’s grandmother passed away in early January. I remember it was during one of my prime times for getting preggers, and I sort of wondered if we would conceive about the same time she passed… and we did, and with a little girl. I really felt a big “circle of life” moment when I did find out I was pregnant.

In April, the hubby had shoulder surgery to fix years of pain and dislocations he had been suffering with. It was a really challenging time for us; I struggled being the caretaker for him, our son, and keeping up with my job and the house work (and let’s be honest, the house work was kept to a minimum). Hubby struggled to watch me, and not be able to do much to help (and he couldn’t wait to be the one doing the cooking again).

The rest of the year we spent a lot of time working, preparing not only for a new baby, but the birth itself, and spending as much time as we could with the toddler while he was still an only child. We took a trip to our favorite beach town Cape May, NJ, and celebrated our 6th wedding anniversary with an overnight trip to DC (and went to a restaurant that did not have children). In between were midwife appointments, trips to the physical therapist for hubby and chiropractor for me.

It’s crazy how quickly the summer months passed. It felt like all of a sudden I was face to face with my due date and just waiting day after day for our lives to change again.  Eventually baby girl made her entrance earth side, and we’ve begun a whole new balancing act.

I think about how I started this year feeling sad and frustrated. I spent a weekend in Vegas for work, and it was the first time in a long time I wasn’t trapped in my head, and I was just having fun (and in meetings of course). Two days after, a little pee stick changed everything and my year was brighter.

I’m so happy to have my amazing husband, and our two amazing children. 2015 has been a good year, and I hope 2016 brings just as much joy and love.

PS: I also saw Dave Matthews Band for the 11th time, and the Bills have missed the playoffs for the 16th year in a row. Unfortunately, the DMB shows don’t outweigh the playoffs.

You may have noticed I haven’t posted in a while…or maybe you haven’t. Either way it’s been too long, so I’m back. I’ve had a baby and have tons of thoughts and experiences I’d like to share.

The first thing I’d like to share is why I went so long without posting. I’m sure it’s partially obvious that after my 30 weeks pregnant post, that I would at some point be having a baby. Originally I promised a 40 weeks pregnant post, but when I reached that point in my pregnancy I didn’t want to bring attention to myself.  I had stepped into my birth bubble.

By the time a woman has reached 38 weeks she has been asked numerous times “when is that baby going to come out?” or received the infamous “you look like you’re about to pop” comments. I didn’t enjoy it during my first pregnancy, so I knew I needed to avoid the comments however possible in my second.

I didn’t post to Facebook about how uncomfortable I was, or how I had yet again gone past my due date. I didn’t want friends and family texting me every day asking if there were any updates (because people, when the baby comes you will hear about it). I wanted to be left alone, to continue in my pursuit to gestate in peace.

There was also another reason I didn’t want to share too much as I reached the end of my pregnancy. I had a birth planned that stepped outside our societal norms, and I didn’t have any interest in hearing anyones opinion about it. I was planning a home birth; I did a lot of research, assembled an outstanding birth team, and worked really hard to prepare as best I could to have the birth I desired. There was no room in my world for naysayers.

My first birth experience was not what I had hoped for, and I was unprepared for the unexpected. I was pushed into doing things I didn’t want because of the protocol of my providers and the hospital. I ended up with a cesarean that I didn’t want, wasn’t sure I needed, and it was physically and psychologically damaging. I knew before the surgeon cut me open that I was not planning on returning to a hospital for my next birth.

The birth bubble is a term I learned from a Facebook group dedicated to mamas that have had cesareans and were looking to have vaginal births in the future (VBAC). You’d be amazed at the negativity so many of these women faced; from their doctors, their family, their friends, and some even from their spouses. People are so quick to tell you it’s not possible (so you should just schedule your repeat cesarean now), or that it’s not safe (you’re going to kill your baby and/or yourself) when they don’t have evidence on their side to back their scare tactics.

Attempting a vaginal birth when you believe your body is broken is not easy. It requires nothing but positivity and support. Enter the birth bubble. I spoke with friends and family openly about my intention to have a vaginal birth at home (HBAC), and anyone that had doubts, I would assure them I had done my research and had a team of people supporting me that had the appropriate experience for this endeavor. Anyone that I didn’t think could offer me the positive energy I needed, I didn’t tell or engage with.

Ultimately, I was pleasantly surprised at the amount of support I received. If anyone did have any real doubts about what I was doing, I didn’t hear about it. And spoiler alert, I did have a VBAC, and though it didn’t go as I had pictured, it was everything I needed it to be. I gave birth to a beautiful baby girl and I couldn’t be more proud of myself, and my definitely not broken body. 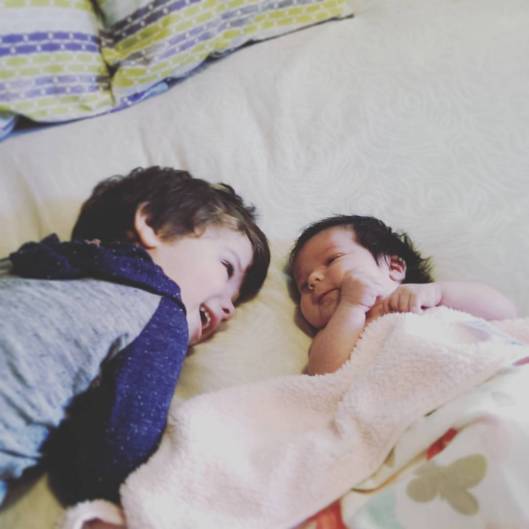