So this will be the portion of the blog that I pick 3 either random or associated things to talk about. Honestly, today, it’s a way for me to write a post without doing too much research and re-writing, i.e. lazy bones post.

#1: Winning! My two favorite teams won this past weekend, the Buffalo Bills and BOOYAH!

*If you don’t know, Booyah! is the coed social sports team I’ve been playing on since I moved to Maryland almost 10 years ago.  We are a team that other teams look at pre-game and think they’ve got it made. Until we kick.their.ass.  I could go on and on and on about how much I love playing football with these people, but I will save that for another day.

#2: The Buffalo Bills will remain the BUFFALO Bills! When word of Bon Jovi and the Toronto group bidding on the Bills came out, the city revolted. I swore that if Bon Jovi took ownership of our team to move to Toronto (or anywhere other than Buffalo) I would do two things: I would NEVER again sing Livin On A Prayer and I would personally organize the Metro DC burning of all things Bon Jovi. 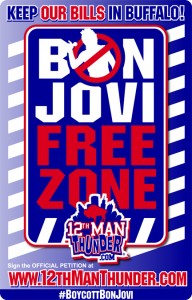 I’m SUPER relieved I get to keep rocking out to Livin On A Prayer; I’m going to a friends wedding this weekend and it’s one of my favorite drunk songs. I’m also relieved to not have to organize the burning party because I know what a bitch it can be to try and get a permit to do anything in DC.

#3: Burn It! I said it yesterday on my Facebook page, but I mean it. If you own a Ray Rice jersey I hope you burn it. I have some lighter fluid and matches I won’t be using on old Bon Jovi cd’s now, so call me if you need some help.